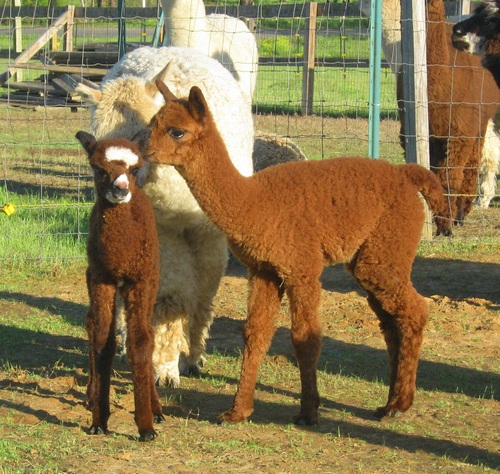 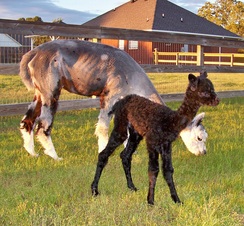 All three births have had their own stories:
Ginger Snap appeared at 324 days on a drizzley Tuesday morning, March 29th while I was cleaning the pastures. She needed a little assistance getting here and I was very glad that God put me where I could help her. She was elbow locked and I just had to give a little push and pull and out she came. After her arrival, her mom Calli, took on the role she excels at, doting and loving caretaker. Ginger weighed 14 lbs, 8 oz. I was overjoyed to find gray fiber in this very active and energetic beautiful girl. She is just what we were looking for in this match. At 17 days she was already 24 lbs, 8 oz.

Spiridion (a.k.a Spirit) was born Friday, April 8th at about 3 PM while I was at work. He was born on day 335, but was a bit premature. He was breathing normally, but did not have teeth, was walking on his hocks and his ears were curled. He weighed 10 1/2 pounds. I was able to get him to take mom's milk right from the start twice before things started looking scary. By 2:30 am on Saturday morning he did not have the energy or the will to get milk. Well, thanks to a Mentor of mine instructing me about tube feeding and the very willing mom, Phaedina, I was able to milk her and give Spirit mom's milk to save this little guy's life. I know God was helping me through this, because some of the time I was so tired, I was on autopilot. Spirit gained weight every day! I was able to not only maintain him but get enough calories in him for him to gain weight. I used my experience as a mother of twins to make sure he did not use all the calories he took in for eating. He would not take a bottle. I tried every time I fed him. Then on a beautiful, sunny Saturday afternoon, I witnessed him up under mom, trying to eat. I watched in awe and excitement. He was hungry! He was trying on his own! I continued to let him feed and them milk mom and feed him what I was able to get from her. The next day, before church, he was already nursing mom when I got out to the pen. I fed him one more time and went to church. For the rest of the day I just watched him and decided to let him learn as long as he had vigor and strength. One more milking and tubing at 10 PM and I went to bed for the first whole night since Friday morning. Monday morning found the scale still rising and I knew he was on his own. He was up on his feet and his teeth had erupted too. At two weeks old he weighted 16 lbs, 8 oz.

Esmeralda was born Friday, May 13th at 9:15 am to our rose gray, Bellesima. She was solid True Black and had gray eyes. Unfortunately she was born with a congenital defect, Choanal Atresia. There was nothing we could do for her. We had to give her back to God because she was just too beautiful for us to keep. We miss her very much.
Featured Items 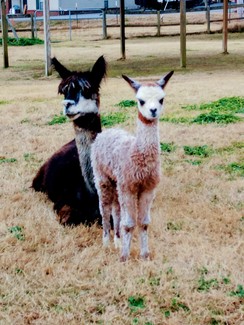 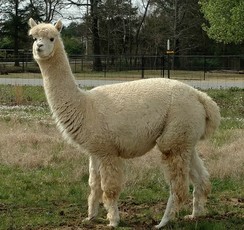